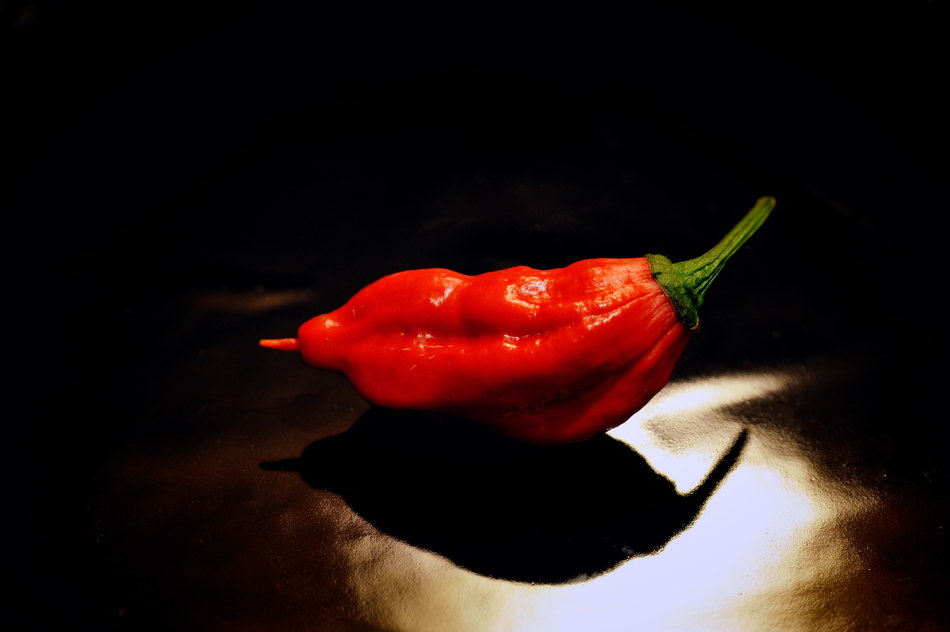 The Bhut Jolokia! The hottest pepper in the world! It wasn’t easy raising these fiery peppers. I protected them from insects and birds as well as a heatwave and record rain, not to mention the affects of hurricane Irene. The first round of fruit yielded only two peppers. When things cooled a bit one plant began flowering like crazy. I didn’t notice many flying insects around so taking no chances I resorted to hand pollinating. Between me and nature this plant is set to deliver about fifty or more peppers. This is the most succesful of the fifteen plants from seeds that I did not expect to germinate. So there are going to be peppers until the first frost. I cut the two peppers from the plant after they were fiery red to photograph them. In doing so I made the classic mistake of touching these without gloves and ten minutes later couldn’t figure out what the strange sensation was on my lips. I had stroked my lips with my fingers while watching a movie. This was my first warning.

So how hot are they? I decided to test the heat by chewing on a piece about the size of the nail on my pinky finger. Soon as I tasted the fruity incendiary flesh I knew I was in trouble. The heat increased rapidly as I started to sneeze and my eyes welled up with tears and my sinuses began to drain. Just like all of the fools before me I reached for milk which helped very little. I had read that the heat is in the oils from the pepper so I  tried dousing the burn with full fat Greek yogurt. This did not help one bit! Next I went for ice cubes. It helped reduce the sensation until the ice melted. I realized I couldn’t keep doing this so I looked around in the freezer and found a half eaten container of strawberry Häagen-Dazs. I began coating the side of my mouth that was burning and running spoonfuls of ice cream over my lips. This seemed to work and over time the burn lessened but somehow it kept coming back! It was my lips! I still had the oils on my lips and every time I licked I transferred back more heat. I got the idea to get a paper towel and soak it in canola oil to cleanse my lips. This worked! It still took about fourty-five minutes before things started to get back to normal. It was then that I felt my innards warming up. If I had eaten more than the 1/8 of the pepper I would have been in bad shape.

So now having tested them myself I can tell the folks who will be getting peppers that they are indeed the hottest peppers in the world. They will also get a written warning!